Submissions Update – We received 2,064 submissions which included 15 who supported, 1 who commented and 2048 who objected.

An invitation will be sent out to those on our contact lists.

Shout out to Rylstone Retro Records for their support

It is fantastic to see the number of No New Coal Mine Here signs are popping up around our town. A big shout out to Pepino’s Restaurant in Rylstone for displaying the sign in their window.

Make sure you #tagthesign when you see one!

You can find the reference links noted in the Mailout on this page: https://rylstonecfc.com/home/links/

On Saturday June 26, at Rylstone Memorial Hall over 60 local people gathered to discuss the upcoming PRIA. Unfortunately there were a large number who had only just heard about this potential coal exploration, again highlighting the inadequacy of the NSW Government’s efforts to contact people and the importance of the RRCFCs efforts in making people aware of the threats to the local area. We had an informative and passionate session, sharing the issues we wish to raise at the PRIA. Many had a problem with the process itself. The lack of notification, the opaqueness of the process and the added chaos raised by COVID and loss of in-person meetings, means community consultation will be poor. Many will not have the opportunity to have their voices heard. The time provided for submissions is woefully inadequate and needs to be extended to at least 3 months.

Lots of work has been happening in preparation to make our voices heard in regards to the PRIA. To read the newsletter download below.

Information Mailout on the PRIA 8 June 2021

Lane Cove Coal & Gas Watch had a massive response to the threat to our Rylstone Region at their stall in Lane Cove. Pages & pages of signatures were filled in against more coal. Awesome to have city supporters who see the bigger long term picture. The stall organisers said, “It feels like the general public’s mood towards coal has shifted. We have been doing stalls since 2014. Back then people didn’t see as much problem with coal mines, coal seam gas was the big no no. But yesterday all we had to mention was NSW govt was opening up new areas for coal exploration and people were saying “where can I sign”. “

Meet the Candidates Merriwa May 5 2021

For a comprehensive report on the night follow this link for a summary of the questions and answers.

Shireen, a local constituent who attended the night, asked a question of the candidates, which was reported on in Newcastle ABC News Radio the following day.  It was her question and a brilliant tactic to give a platform to those who were against the granting of new coal exploring licences and the opening of new coal mines.

Shireen’s question was in two parts and is quoted below:

First, I asked for a show of hands from the candidates as to who would go into parliament with a clear goal to support no new coal exploration and no new coal mines in the Upper Hunter, and I wanted to who did before asking the second part of my question.

Secondly, I asked these candidates to outline their plan to transition a community that is quite dependant on coal and to help those who are scared about ‘how to keep the lights on’ and where their jobs will be in the future as they need to be brought along the journey (that is, address the fears stoked by some of the other candidates during their introductions earlier in the evening).

Sue Abbott, Tracy Norman and Kirsty O’Connell all spoke passionately about how coal was a dying industry, and that there needed to be support for existing industries, support for those working in or dependant on mining, investment in the future and diversification, believing that coal is an industry without a long-term future and policies are needed to help map out a prosperous and healthy post-coal future for the region.

Kirsty O’Connell (http://www.kirstyoconnell.com.au/) wants to develop a comprehensive social economic plan for the future, to attract complementary industry. She would not support any further coal exploration, new coals mines and would also kill expired exploration licences.

Tracy Norman (https://www.tracynormanforupperhunter.net/) outlined her vision for diversification and was clear that new mines do not equal new jobs. She wants to protect lands, and bring renewable energy and more jobs to the area. She sees investment in new industries for the region, and clean energy as being important, with education, training and research facilities needed to set the community up for new industry opportunities.

Sue Abbott (https://greens.org.au/nsw/upper-hunter-by-election) wants a coal community and environment trust fund, and investment into green renewable infrastructure and green transport, and that we must do it now as the market is running ahead and we’re being left behind. She spoke of how she is committed to no new coal exploration or mines, and protecting farmland and water resources from the further expansion of the coal industry.

Kate Fraser felt that others had said everything there was to say and fully endorsed what had been said.

It was disappointing that of the 12 candidates present, that only four are honest and brave enough to say to the electorate that the time has come to say no new coal, and have the conversations around what this means for us all in the future. That coal is killing our planet, destroying our air and our water . That there are alternatives, and we should be protecting our land and investing in alternative industries.

Of those who were honest enough to have these conversations and to put forward their plans, all three gave us viable visions for what they would do if elected., Tracy Norman is a very solid candidate, and wants to see the investment in her community to give it a future. Kirsty has worked in community engagement for many years, giving her very well honed communication skills. This background now informs her vision, where she wants to give everyone a say in a plan for the future that weans the region off coal. Sue believes strongly that urgent action is needed and is passionately campaigning for this. All three see issues with the lack of investment back into the region that has produced the coal royalties enjoyed by the whole state thus far.

For me, the choice comes down to voting for an independent (Kirsty or Tracy), or the Greens candidate Sue. Any of these three would be a strong voice and in parliament and they’ll be in a strong negotiating position, as their election puts the coalition into minority government. The Greens already have two members in the lower house, so Sue would have their support as well. However, I don’t know if this electorate, where coal has been the backbone, is yet ready to make this leap. Kirsty has a long history in this electorate. She also showed the communication skills and the ability to engage with and understand her community. For these reasons, I found her to be the strongest candidate on the night.

My parting thought is how does this translate into a vote, and how to use my vote wisely. Our elections are usually mandatory preferential voting, but NSW state elections are slightly different (https://www.abc.net.au/news/2019-03-20/nsw-election-voting-explained-by-antony-green/10916802?nw=0). So my plan is to not only vote for who I would most want to see win, but to continue to number the boxes through to the point where one or the other of the ‘major’ parties are nominated. In this way, I give my vote will continue to flow through and have the best chance of electing someone I can live with. It will show all four candidates who did put up their hands plus one or two others. My challenge is to work out who most deserves to be those last one or two – as the choices from here really are not that appealing. 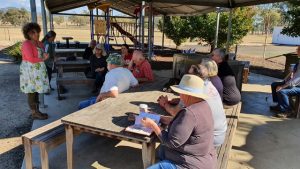 Bylong, the centre of a battle to save farming land from the development of the KEPCO mine was where 20 residents from Bylong, Wollar, and Rylstone met one of the candidates in the current Upper Hunter by-election.  Sue Abbott, is standing for the Greens.  Their aim was to find out her policy on coal mining.  Ms Abbott has a medical background with a specialty in Altitude Medicine and is a strong advocate for the need for clean air.   Supporting a transition away from coal to renewable energy sources, the Greens candidate wants to ensure anyone employed in mining was not left “stranded”.  Increasing automation of coal mining positions has already affected these workers.

“No new mines and no extensions should be taking place,” said Ms Abbott.  Citing the April 22 virtual Climate Summit hosted by US President Biden, as world-wide demand for coal diminishes Ms Abbott believes we need an urgent plan for those workers who will be left vulnerable. Especially given that many of the 40 participating nations set targets to reduce carbon emissions by 50% by 2030.

Recently local landholders, of the Hawkins/Rumker region 4km out of Rylstone, learnt that the NSW Government is opening the area for mining exploration. Forming the Rylstone Region Coal Free Community group to oppose this, members of the group at the meeting were keen to hear the experiences of Wollar and Bylong residents. These communities have already suffered through the insecurity of knowing what will happen to their homes & farms, town & livelihoods.  In the case of Wollar resident Bev Smiles, she was very clear that mining does not build a town, it decimates it.  It does not bring jobs, progress or the opportunity for businesses to thrive and the jobs it does bring are not for the people in the town.  The people who work in Wollar do not live there.  Bev inspired hope for the RRCFC advising them to make a firm stand, organise and contact other groups and to send politicians a very loud, clear message that a coal mine in Rylstone is not welcome.

A number of the Mudgee Classic bike riders at Rylstone Showground were critical of the NSW government’s proposal to open up Hawkins/Rumker for mining exploration.  Riders commented that the decision is confounding in the light of the virtual World Summit on climate change where countries committed to reducing reliance on fossil fuels. One rider from Lane Cove commented “This is the death rattle of the coal industry”. The RRCFC members handed out flyers and had posters at the event to highlight the cause to stop coal exploration of our beautiful region.